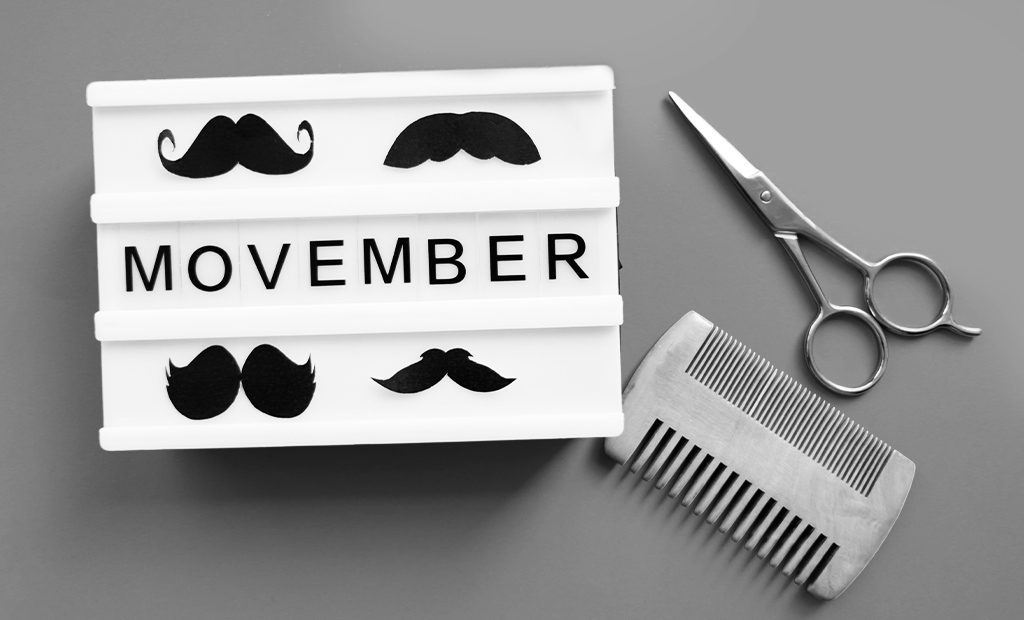 During the month of November at CG Life, we like to celebrate Movember in style. As many of our employees get to work on growing in their own facial hair to raise awareness for men’s health issues, we decided to pay homage to some of the notable mustaches of the science world, both recent and historic. See who made it to our list below to learn about some awesome scientific work, while appreciating well-groomed upper lips!

Francis Collins is the 16th Director of the National Institutes of Health and former lead of the Human Genome Project, but he’s also famous for perfecting his signature lampshade-esque ‘stache in addition to his many impressive achievements! This year Francis Collins was elected as a Foreign Member of the Royal Society, received the Templeton Prize for his scientific and spiritual curiosity, and performed a wholesome pandemic-themed rendition of Somewhere Over The Rainbow for The Children’s Inn. To find out more about Francis Collins and his work, check out his NIH Biography.

Tom Silhavy is a bacterial geneticist whose lab is best known for isolating signal sequence mutations and identifying protein secretion mechanisms of cells. He continues to work on decoding the behavior of the outer membrane to characterize cell responses to stress. View his Princeton Molecular Biology page here for more details! Plus, Dr. Silhavy rocks a classic bushy painter’s brush mustache.

Check out this incredible chevron ‘stache! Neuroscientist V.S. Ramachandran is currently the Director of the Center for Brain and Cognition at UCSD’s Dept of Psychology. Time listed him in their 2011 Top 100 list as “one of the most influential people in the world” while Foreign Policy included him in their “World’s Top 100 Public Intellectuals” of 2008. He developed the mirror box as a treatment for phantom limb pain in patients who have had amputations. His work continues to inform us about unusual neurological conditions like synesthesia and Capgras syndrome.

There’s just something about the pairing of this mustache with those glasses that is such a classic, memorable look! Dr. Randy Schekman received the 2013 Nobel Prize in Physiology for his work in cell membrane vesicle trafficking with James Rothman, Ph.D. and Thomas C. Sudhof, M.D., Ph.D. He donated his prize money to cancer research at UC Berkeley, where he is a professor of Cell and Developmental Biology in the Department of Molecular and Cell Biology. He’s also the former Editor-in-Chief of both PNAS and eLife. His professor-style ‘stache suits him well!

CG Life’s VP of Business Development, Todd Kuna, just had to make the list with this ‘stache. Graduating with a B.S. in biology and biochemistry, Todd was well on his way to becoming the next groundbreaking lab science researcher when he decided to pivot into science communications and marketing. Now he crunches the numbers to make our business innovative and successful! His variety of facial hairstyles are a favorite of ours every November.

Also known as The Lord Rutherford of Nelson, the Father of Nuclear Physics set the bar high for all walrus-style mustaches after him! It’s even immortalized on the New Zealand $100 note. Rutherford is known for defining the concept of radioactive half-life using radon as well as discerning alpha and beta radiation for which he received the 1908 Nobel Prize in Chemistry. Read more about him here.

Tesla, Inc. should probably consider rebranding their logo in the shape of Nikola Tesla’s impeccable ‘stache! Did you know Tesla theorized a wireless power transmission system that relied on floating balloons capable of discharging 4 million volts in the upper atmosphere? While we might be glad that those giant terrors aren’t hovering above us today, Tesla’s work was foundational to our understanding of electricity and power transmission, and that dark lampshade mustache is forever engraved in our memories.

George Washington Carver studied crop diseases and mycology in the first half of the 20th century, finding fertilizers and crops to replenish soil depleted by cotton farming. His work helped poor farmers improve the health of their land by growing restorative crops like peanuts and sweet potatoes. He rose from slavery and racial injustice to become one of the earliest and most trusted leaders of the environmentalist movement–all while sporting his incredible handlebar mustache.

Early Danish astronomer Tycho Brahe noticed that comets orbit outside the range of the moon, leading him to hypothesize a system in which the planets orbited the sun and that system orbited the Earth, which remained stationary. Although his theory was partially flawed, it represented a major step forward for Heliocentrism. He later trained astronomer Johannes Kepler, who also has facial hair worth checking out! Brahe was thought to have grown out his impressive beard and mustache after losing his nose in a sword duel with his cousin over who was a superior mathematician. It happens! We’re not quite sure how to classify Tycho Brahe’s ‘stache…perhaps “ultra-walrus”?

Camillo Golgi was a 19th-century Italian biologist known for discovering his namesake staining method that is still used today for visualizing nervous tissue, but he didn’t stop there! He also mapped the activity of nephrons, discovered the cause of malaria, and identified previously-unknown organelles, including the Golgi apparatus. How did he have the time to do all of that and still maintain such a perfect handlebar?

We hope you’ve enjoyed these magnificent mustaches across the ages. We recognize that almost every scientific achievement comes with immense work from diverse teams of scientists, not just the men you see here. For content on a selection of fabulous women in science, check out our blog on women in STEM who personally inspire us!