The Medical Benefits of CBD: Real, or Just Hype?

There’s a health food store in my neighborhood that’s been there for ages, and I never looked twice at it until the other week when I saw a poster on their window proudly promoting the medical benefits of cannabidiol (CBD) oil. The unabashed promotion of this chemical, a derivative of cannabis, immediately stirred up several thoughts in my head: as a former pharmacology researcher, I’ve always been worried that consumers were getting ahead of themselves in trusting CBD to cure their ills. But until that moment, it didn’t bother me much because I thought CBD was only used in the margins of society and could only be found in seedy shops in the lesser-traveled parts of the city.

But now, as I peered through the window of this seemingly innocuous health food store right in the middle of my highly-educated, highly-engaged university neighborhood, I started to wonder if CBD has finally gained mainstream acceptance.

What do we really know about the safety and medical benefits of CBD? And what will it mean for the pharmaceutical industry as CBD grows beyond its underground legacy and finds its place in mainstream medicine?

I wanted to find out. Here’s what I learned:

The Science of Cannabis

Cannabis contains thousands of natural compounds, dozens of which, if not more, are psychoactive, meaning they affect one’s behavior and cognition. The most famous of these compounds is delta-9-tetrahydrocannabidiniol (THC), the primary intoxicant in the plant. Many people praise cannabis for its myriad of supposed medical benefits. inhaleMD (the first result in my Google search for this) tells me that cannabis can help with everything from anxiety, depression, and PTSD to cancer to HIV/AIDS, multiple sclerosis, and ALS. But most of these claims have not been tested and are subject to exaggeration.

“The trends and popular wisdom aren’t all backed by science,” said Dr. Jonathan Adelstein, Assistant Professor of Psychiatry and Behavioral Sciences at Northwestern University. “We don’t know nearly as much as we like to think we do, and evidence is starting to suggest that cannabis is not the miracle drug that everyone wishes it were.”

The lack of research on cannabis’ medicinal benefits, plus its tendency to produce psychoactive effects, it’s wide use without proper medical supervision, its potential for abuse, and the stigma associated with its legal status, has the medical community hesitant to accept it as a medical therapy.

“Any behavior that a consumer engages in outside the supervision of a doctor and prescription of FDA-approved medications is risky and unknown, and no claim can be made with any certainty or accuracy.  All we know is that we don’t know,” said Dr. Adelstein.

The Potential of CBD as a Medical Therapy

CBD is a close cousin of THC – it acts on the same receptors as THC in the brain, but it is not intoxicating in most cases. Like THC, CBD is subject to spurious claims about its medicinal benefits, but the medical community is much more accepting of it because of its lack of intoxicating and addictive effects. The World Health Organization, in fact, has acknowledged that CBD does not have a potential for abuse, and that “to date, there is no evidence of public health related problems associated with the use of pure CBD.” 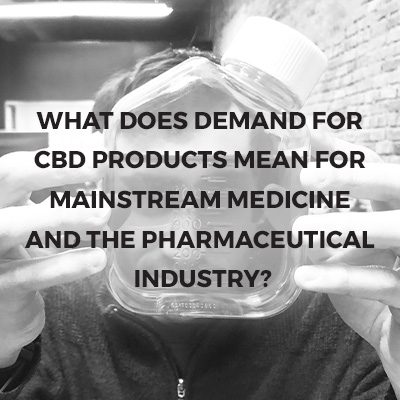 In 2018, the compound found a mainstream medical use in the form of Epidiolex, the first FDA-approved CBD-based medication. In clinical trials, this drug was shown to reduce the frequency of seizures in a group of patients with either Lennox-Gastaut syndrome or Dravet syndrome, two rare forms of pediatric epilepsy.

The FDA approval demonstrates that CBD is safe in its pure form in at least one group of epilepsy patients and the WHO’s endorsement brings some certainty to the medical community. But when it comes to CBD’s other medical benefits, the research is still lacking. Besides its anti-epileptic potential, pre-clinical data suggests that CBD may also be beneficial in treating inflammation, pain, cancer, psychosis, anxiety, and even substance use disorders. But for most of these conditions, the National Institute of Drug Abuse warns that the research is very preliminary. Plus, outside of Epidiolex, CBD is unregulated (like cannabis), meaning “if you go down to the corner store, the CBD oil you find there may be adulterated with fillers, or even other chemicals that can be toxic,” according to Dr. Adelstein. “The oil and may not even contain any CBD at all.”

Demand for CBD Will Grow

Despite the lack of data on CBD’s medical benefits, and despite the fact that unregulated CBD-based products pose a health risk, the compound is expected to continue gaining mainstream acceptance, and this will lead to greater demand for the production of pure CBD. First, as people continue using CBD oil to self-medicate, more researchers will want to study the safety of CBD-based products. Next, as scientists gain a better understanding of CBD’s medicinal effects, the demand for CBD-based pharmaceuticals will rise. Finally, for better or for worse, CBD is showing up in consumer products everywhere. Not only are health food stores like the one in my neighborhood selling CBD oil, but CBD is also showing up in food – in gummy bears, chocolate bars, and even bottled water. And food sellers want the compound to be regulated to guarantee the safety of their products.

All this means that pharmaceutical companies, academic researchers, and food manufacturers will need to get their hands on greater quantities of pure CBD.

For now, most CBD comes from hemp, a crop that is currently legal to cultivate in the US because it contains very low levels of THC and CBD. According to Grand View Research, the global hemp market is expected to grow 14% per year between now and 2025. By 2022, the Brightfield Group says the hemp-CBD market could hit $22 billion.

How to Handle the Growing Demand for CBD Products

While its legal in the US, hemp doesn’t contain nearly as much CBD as cannabis, which means significantly more hemp needs to be processed to isolate the same amount of CBD.

But CBD is not easy to extract from cannabis, either. Because cannabis contains thousands of compounds, it is challenging to purify CBD in large quantities. Besides, given its legal status, cannabis is hard to come by, anyway: interested laboratories can only receive cannabis through one source, the University of Mississippi, and they’re running low on supply and there have been some recent concerns about the quality of the samples. The DEA announced in 2016 that they’d license new cannabis suppliers, but so far, they have not acted on this promise.

But hope is not lost. Researchers recently reported in Nature that they’ve engineered yeast to produce THC and CBD. While this research is preliminary, it demonstrates a method by which companies who are looking to research CBD and produce CBD-based drugs and other products might be able to bypass the legal and technical challenges of extracting pure CBD from cannabis.

This approach is just one of many that researchers are developing to generate large quantities of CBD, but it shows proof of principle that the scientific community is serious about making CBD available for research and manufacturing. While CBD chocolate bars and homeopathic remedies may be a passing fad, and while the push for wider legalization of recreational cannabis vexes the FDA and healthcare professionals, CBD’s FDA approval for treating epilepsy shows that this compound, as long as it is regulated, has a promising future in medicine. If you want a piece of the pie, the time to get on board is now.

If you have questions on how to adapt your business for the growing CBD market, contact us here.