23andMe Sold Your Genetic Data to GSK: What this Means for You, Your Data, and Your Health

Earlier this summer, the often-scrutinized at-home genetic testing company 23andMe sold genetic data from five million customers to the pharmaceutical company GlaxoSmithKline (GSK). This surprised a lot of their customers who had forgotten that they consented to this when they signed up for the service. Yes — before they even purchased their testing kits, 23andMe’s customers were asked if they wanted to participate in scientific research. While these customers may have assumed that this research would stay within the walls of 23andMe, their consent gave the company permission to share their data with other companies who wished to use it.

While the ethics of 23andMe’s business model are still under debate, this doesn’t change the fact that these data could potentially play a vital role in the development of more effective drugs for diseases, ranging from Alzheimer’s to cancer.

Indeed, as precision medicine becomes more common, and as pharmaceutical companies seek to develop drugs based on narrower indications and rarer genotypes, access to people’s genetic data will affect the entire development process, from pre-clinical research to clinical trials. Therefore, to truly understand whether 23andMe’s decision to sell its customers’ genetic data was a righteous endeavor, the deal must be examined from all angles, including what 23andMe’s data consist of, how GSK plans to use these data, and the overall value of genetic data in precision medicine.

What data does 23andMe have of yours?

If you’ve ever paid for one of 23andMe’s kits, spit in their tube, and mailed it back, 23andMe has data on dozens of your traits. They’re not sequencing your entire genome, however, for two reasons: first, your whole genome sequencing costs over $1000, a price most consumers are not willing to pay, and second, the company doesn’t really need to characterize each of the 3 billion base pairs in your genome to give you the information you’re looking for. Rather, 23andMe uses a microarray filled with beads to bind and identify specific DNA fragments from your saliva. The fragments that bind to the microarray beads contain the single-nucleotide polymorphisms (SNPs), or variations in single nucleotides, that are associated with the traits the company (and you) are interested in investigating.

Currently, 23andMe can characterize SNPs associated with your risk of developing at least five different conditions, including breast cancer and Alzheimer’s disease, and can determine whether you carry the SNPs that cause more than 40 genetic disorders, including cystic fibrosis and sickle cell anemia. It can also report your state of wellness, including your likely sleep quality and your tolerance for lactose, and at least 25 other non-medical traits, including your predisposition to baldness and to having a unibrow.

All of these traits, medical and otherwise, are also of interest to pharmaceutical companies such as GSK.

Why does GSK want your genetic data?

Your genetic data can help pharmaceutical companies in several ways. First, they can help companies identify people who are susceptible to developing different diseases and streamline their recruitment for clinical trials. They can also help predict or explain why someone might respond to a drug differently than their friend, which will lead to the development of safer, more effective drugs for people based on their unique genetic profiles.

The largest demand for genetic data comes from companies who are looking to get on board with precision medicine, the practice of developing treatments for individuals based on several characteristics, including their genetics. But while precision medicine research is designed to yield more effective medications for more patients, the trend is also making it harder to recruit patients for clinical trials. A significant number of clinical trials already fail because they can’t recruit enough patients. Add in the push for precision medicine, in which companies are targeting drugs to narrower populations, and it will become increasingly difficult to recruit enough patients to demonstrate a drug’s safety and effectiveness.

This is why GSK is interested in 23andMe’s data. Right now, they’re trying to develop new drugs for patients with Parkinson’s disease who express a mutated LRRK2 gene. Of the 10% of Parkinson’s cases in which a genetic link has been found, LRRK2 is the most common genetic contributor to the disease: the G2019S mutation in LRRK2 accounts for 15-20 percent of cases in Ashkenazi Jews and about 40 percent of cases in North African Arab Berbers. But among the general population, this mutation is only present in about 5% of the population. This means that to recruit 1,000 people with the G2019S mutation into a Parkinson’s trial, a sponsor needs to screen at least 20,000 people.

With their new wealth of genetic data from 23andMe, GSK can now find people who don’t just have Parkinson’s disease, but are susceptible to the condition, thereby making it easier to find those patients who are eligible for their Parkinson’s trials.

Scientists have found genetic links to many diseases previously thought to be completely sporadic, including several cancers, metabolic disorders, and Alzheimer’s disease. Scientists are bound to discover more genetic links to disease, which will incentivize companies like GSK to use genetic data to find and categorize patients for clinical trials.

But was the 23andMe-GSK deal ethical?

Maybe. First things first, this transaction was definitely legal, given that 23andMe customers consented to the use of their genetic data for scientific research. 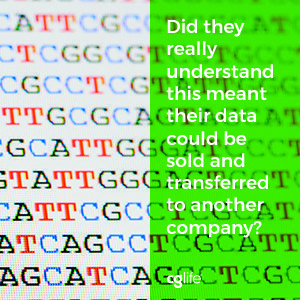 Nonetheless, some in the media have expressed concerns about the security of these data. Some are worried they might have been witnessing a repeat of the Facebook-Cambridge Analytical scandal. But this is not another Cambridge Analytica.

In that case, not only did they collect your data without your consent, but they also collected data from everyone in your Facebook network without their consent. In contrast to Facebook and Cambridge Analytica, 23andMe is operating within the boundaries of your informed consent.

But there are still some open questions. For example, 23andMe customers consented to sharing their genetic data for “scientific research,” but did they really understand this meant their data could be sold and transferred to another company? It’s up to medical ethicists to decide whether 23andMe acted appropriately.

Nevertheless, the deal is done, and GSK is looking forward to using your data to develop more effective treatments for Parkinson’s disease and other disorders. 23andMe provides companies with a unique opportunity to get their hands on millions of genetic records just for this purpose, and it’s likely that the field of drug discovery will continue to move in this direction as pharma companies aim to develop more precision medicines for people in need.

Have a PR issue and need advice? Contact us.