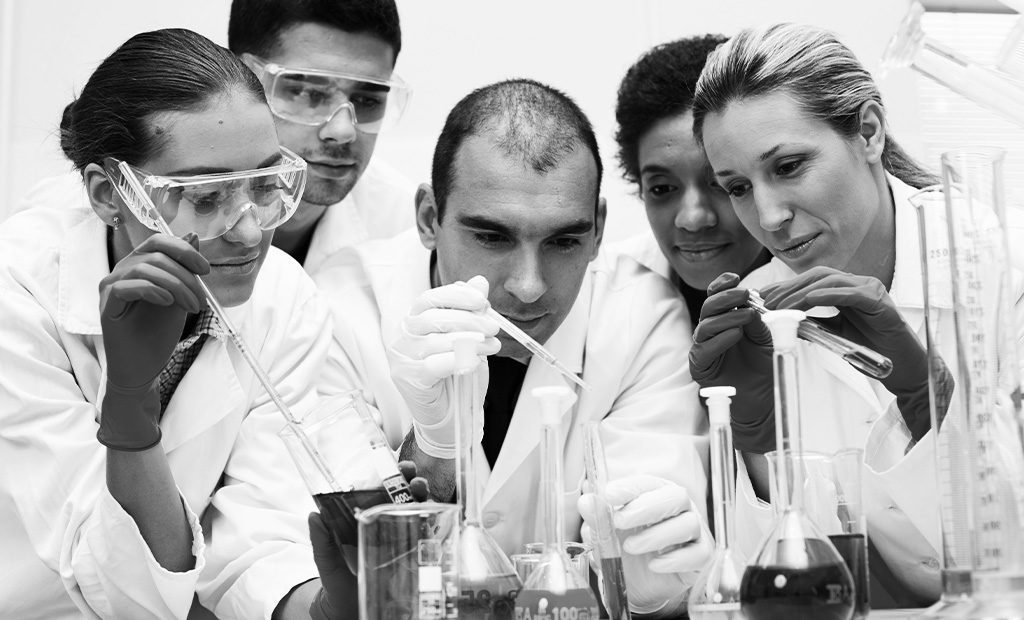 We’re all guilty of at least one or two corny science marketing infringements, but some of us really lean into it. You know who you are. You’re so busy ‘accelerating’ ‘cutting-edge’ research and highlighting ‘novel and robust’ data that you don’t have time to birth something a bit different. We get it. So, what’s the solution?

The first step is to recognize you have a problem. The second step is to hire an agency like CG Life (joking, not joking) to inject some creative sparkle. (Seriously, give us a holler!)

In the meantime, here’s an up-to-date list of terms and tactics to avoid, submitted by people from throughout our integrated divisions.

Well, well, well. Look who has attractive, oddly young scientists in lab coats and protective eyewear working in their facilities (see above).

Stock imagery can be a necessary evil but cast a critical eye on the scene and the vibes. Is it scientifically accurate? And does it look genuine? If the beaker fluid bears an uncanny resemblance to black cherry Kool-Aid, well, that’s probably what it is. At best, your imagery will be generic and forgettable. At worst it will become a laughing stock. Oh no!

According to our design team, there are plenty of alternatives. You can do an original photoshoot (they don’t always have to break the bank) or experiment with illustrations, vectors, and 3D renderings to visualize your work.

The science itself can also be the star of the show: “We’ve had really great feedback on images like 3D molecules and stained proteins,” says Colleen Lange, Art Director. “They are colorful and just all-round beautiful to look at.” Check out #SciArt on Twitter for some inspiration.

Trying to Rank for ‘Cells.’

A common misconception with digital marketing is that ranking organically for terms with higher search volumes is unequivocally the best strategy. In reality, showing up on the first page of Google is likely unachievable. Trying to rank for ‘cells’ or ‘DNA’ or ‘science’ will pit you against the Wikipedias of the world and (spoiler alert) you won’t win. Even if you could compete, the vast majority of the traffic won’t be potential customers. They’ll be 8th graders doing science projects.

The solution: Optimize for strategic long-tail keywords that have lower search volumes. Instead of ‘cells,’ shoot for ‘mammalian cell lines’ or something else that is less competitive and that indicates an intent to buy.

Science writers: resist the urge to start an article on genomics with a now and then comparison of sequencing costs. These articles follow a similar format, beginning with: “In 2001, the first human genome was sequenced,” and then referencing Moore’s Law.

“I have done this a lot,” says Juliet Preston, Content Director and author of this article. “To the point that, even if no one else is doing it, it’s already too much.”

It’s also safe to say that 99% of the time, the product or research at hand isn’t a ‘breakthrough,’ nor is it ‘groundbreaking’ or ‘game-changing.’ Dems da facts. So, when you’re searching for impact, it’s better to let the data and the findings do the talking. Leave the elaborate adjectives at home.

“Our main goal is to get into the Wall St Journal this year,” said the early-stage private company with a niche prescription dermatological product. Hmmm. That is a challenging one.

Many times, people try to target the publications that they personally read and are drawn to. After all, they have a massive audience. The downside is that their size makes coverage in them incredibly difficult to land and it’s really not a smart use of everyone’s time and energy. It’s better to target trade publications or local press that have a more focused and relevant audience. You can hone your message and build an online presence so that in future years if you do land in the WSJ, it will be a favorable and polished angle.

Another recurring area of frustration for the PR team tends to be around press releases.

“It’s a pet peeve of mine when a company starts a press release with ‘Company X today announced…’,” says Managing Partner Erik Clausen. “We know it’s being announced because we’re reading the announcement! Just state what happened in as few words as possible and get to the point.”

Ben Marcus, a PR Account Supervisor, stays vigilant against two overused tactics. Firstly, press releases for things that aren’t newsworthy – just corporate overshares. If you do feel the need to issue a press release announcing your office just added an accent wall to its boardroom, resist the urge to pitch it as you will lose all credibility with the media.

Ben’s second gripe (perhaps stemming from his Ph.D.) is unsubstantiated claims, specifically; “Saying something is the ‘best’ or ‘most sensitive’ or ‘premier’ or ‘[insert qualitative term]’ without backing it up with data. These are scientific instruments, after all – not mattresses,” he notes.

Logos are inherently subjective, but it’s fair to say that if you work in genomics or do something related to DNA; stop, think, and put down the double helices. They’re far too overused.

On a practical front, VP of Client Strategy Jeremiah Worth spends a lot of time convincing companies that they shouldn’t ignore prominent brands when undertaking a naming exercise.

“We aren’t a video game, so naming our product HALO shouldn’t be a problem,” they say.

True, they may be in a different industry, but Google doesn’t give a hoot. A non-competing competing product will have already scooped up your domain names, social media handles, and will obliterate your chances of organically ranking in search results. It’s better to be original, creating a new brand from scratch.

Incredibly vague mission statements are another common foul in the science marketing realm, in particular, companies that connect 76 dots to claim that they’re “saving lives.”

Likewise, companies should refrain from saying “We are the Apple/Uber/Tesla of….” That’s not a valid positioning statement. To borrow from the no-go list; be more novel. It also just makes you think of the better known, bigger company.

Our marketing team also passed along some key phrases to avoid. ‘Best in class’ lacks all meaning at this point. And while we’re here, dial back on the ‘reimagining.’ It has been overused in science taglines in recent years (i.e. “Proteomics, reimagined,” or “Latex gloves, reimagined”).

At this point, you may be viewing us with a skeptical eye. “Look at CG Life up there on their high horse, criticizing my clichés.” To be clear, we’re not immune and we don’t (always) judge companies that make some of the more egregious errors. Rather, it’s all about learning and moving forward to the next-generation of science marketing phrases.

That leaves us with one final pro tip – when in doubt, puns never go out of fashion.