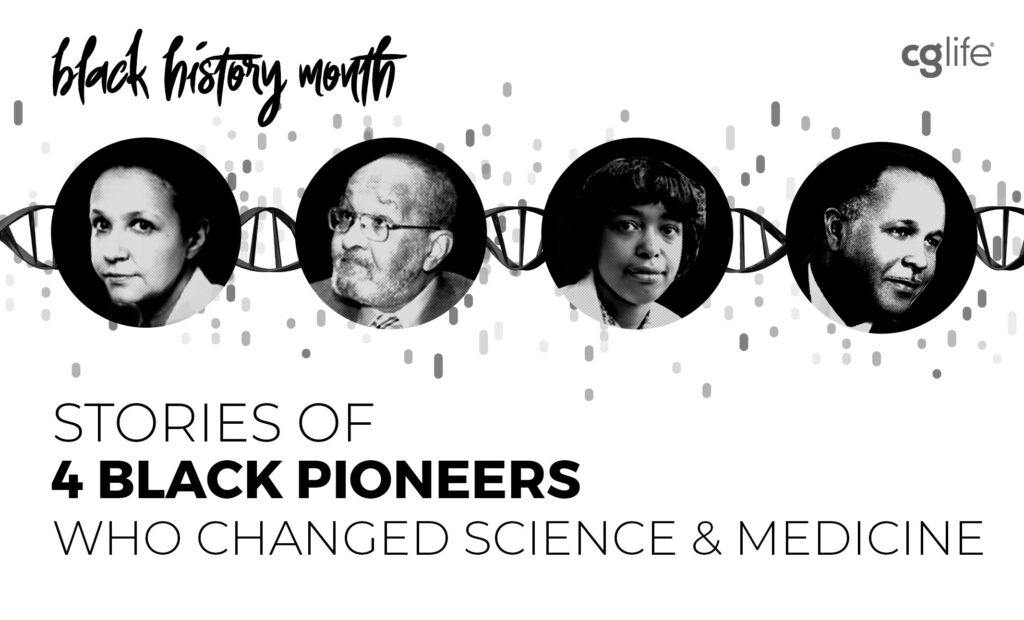 In celebration of Black History Month, we’re shining a spotlight on some notable Black Americans who made incredible contributions to the world of science that we love so much. Some achieved noteworthy “firsts” in their field, but all have ferociously pursued curiosity and achieved greatness even within the constant confines of systemic racial inequity. From bioluminescence to soybeans, below are the stories of four Black American scientists who made groundbreaking discoveries in biomedical science.

Though cancer remains a devastating burden worldwide, patients have been able to face the disease with more hope thanks to the foundational research of scientists like Dr. Jane Cooke Wright. Born in 1919, Dr. Wright came from an illustrious line of physicians, several of whom were the first Black graduates of their medical school. After graduating at the top of her class from New York Medical College in 1945, she earned an internship at Bellevue Hospital and completed her surgical residency at Harlem Hospital.

In 1949, she joined her father in research at the Harlem Hospital Cancer Research Center, which he had founded. Together they were interested in increasing access to chemotherapy as a treatment option, as this new approach was largely viewed as a “last resort” with unclear therapeutic parameters.

Dr. Wright and her father first made key discoveries in the use of folic acid antagonists as therapies. These therapies targeted solid tumors by inhibiting cellular mitosis to stop cell proliferation, a mechanism that formed the foundation of modern chemotherapy. In 1951, Dr. Wright’s team identified methotrexate, a foundational type of chemotherapy still used today. This discovery also set the stage for chemotherapy to enter the mainstream, ultimately saving millions of lives.

Additionally, the father-daughter duo pioneered the use of tissue culture in cancer research. By growing samples of a patient’s tumor in culture, they found they could evaluate the efficacy of therapies without subjecting the patient to toxicity. Dr. Wright was also among the first to explore combinatorial therapies, experimenting with specific sequences and dosages of different chemotherapies to increase effectiveness while reducing side effects.

Until her retirement in 1985, Dr. Wright continued to break barriers of race and gender in her field, becoming an influential leader in clinical oncology worldwide. Her work paved the way for chemotherapy to become not only a more widely accessible treatment for cancer but also a more precisely targeted and tolerable approach.

If you’ve ever been prescribed a steroid medication, you can thank Dr. Percy Julian for laying the groundwork for the drug industry to produce it. Dr. Julian was born in Montgomery, AL in 1899 and grew up amidst the oppressively racist cultural and legal atmosphere of the Jim Crow South. Despite the challenge of pursuing higher education at the time, Dr. Julian was among the few Black students accepted to DePauw University in Indiana. He achieved academic success in the face of numerous indignities there, graduating as valedictorian in 1920 with a major in chemistry.

Dr. Julian then earned a fellowship to obtain his M.S. in chemistry at Harvard University. However, anticipating resentment from white students being taught by a Black professor, Harvard withdrew his fellowship and, in turn, his opportunity to complete his doctorate there. Dr. Julian was ultimately able to secure a fellowship at the University of Vienna and earned his Ph.D. in 1931. His work on the chemistry of medicinal plants flourished despite the stifling environment he faced upon his return to the U.S.

In 1935, Dr. Julian and a colleague achieved the first total synthesis of physostigmine, an alkaloid derived from the Calabar bean that was used to treat glaucoma. From there, he was on a path to make groundbreaking medical contributions— with beans. While synthesizing physostigmine, Dr. Julian found crystals of stigmasterol in his reaction, a compound whose central ring structure of 17 carbon atoms is also found in steroids.

This was huge, as chemists had been working for years to develop cost-effective ways to synthesize steroids, and sourcing from a plant made for cheaper and more widely available steroid drugs (which were almost exclusively derived from animals until that point).

While later working at the Glidden Company developing innovative soy-based products, Dr. Julian inadvertently discovered a method of mass-producing stigmasterol after water leaked into a large tank of soybean oil. He developed this into a production protocol that gave scientists a means of synthesizing progesterone, and later other sex hormones, on a massive scale. In 1949, he also pioneered a method to synthesize both cortisone and hydrocortisone. Dr. Julian maintained a legacy of leadership in science and in the African American community and the impact of his groundbreaking work is still felt in medicine today.

Racial inequity in preventative medicine, including vision care, is a pervasive but often overlooked issue in the United States. It was this issue, however, that drove Dr. Patricia E. Bath to her extensive work in blindness prevention, including the creation of a new discipline known as community ophthalmology.

Dr. Bath developed an early interest in medicine after learning about the work of Dr. Albert Schweitzer’s service in leprosy care in the Democratic Republic of the Congo. She was a standout student, earning a National Science Foundation Scholarship to complete cancer research while still in high school. After earning a B.A. in chemistry from Hunter College in 1964, Dr. Bath attended Howard University College of Medicine, where she pursued a specialty in ophthalmology. Even early in her career, she dedicated herself to numerous service opportunities, including volunteer health care during the Poor People’s Campaign in 1968.

During her internship at Harlem Hospital, Dr. Bath noticed disproportionately high rates of blindness among her Black patients relative to the predominantly white patients at the recently affiliated Columbia University Eye Clinic. She worked to establish eye care at Harlem Hospital, which did not have an ophthalmologist on staff, and collected compelling data on the incidence of blindness and visual impairment. Dr. Bath’s work persuaded her professors at Columbia to begin operating on Harlem Hospital’s blind patients, free of charge, and she was among the team of physicians that performed the hospital’s first eye surgery in 1969.

Throughout her medical career, Dr. Bath continued to champion blindness prevention and equity in vision care. As a professor at UCLA, she established a program to provide keratoprosthesis, an innovative surgical approach to restore eyesight to patients with corneal disease, and led the first national trial of the method in 1983.

Importantly, Dr. Bath’s research demonstrating a higher prevalence of blindness and glaucoma in the Black community in Harlem and other underserved areas led her to pioneer the discipline of community ophthalmology. Her academic work leveraged public health and community medicine to bring eye care to underserved populations throughout the world, and she promoted blindness prevention directly through her prolific humanitarian work as well.

Emmett Chappelle: A Luminary in Bioluminescence

Whether you call it a lightning bug or a firefly, you’ve probably caught one of these glowing critters and wondered how its brilliant backside works. The compounds responsible for that sparkle, luciferase and luciferin, formed the basis of some of Emmett Chappelle’s most important work.

Chappelle was born in 1925 to a family of Arizona farmers. After graduating high school in 1942 as valedictorian, he spent several years in the Army before pursuing a B.S. in biology at the University of California, Berkeley followed by a master’s degree from the University of Washington.

While working in a research division of the Martin Marietta Corporation, Chappelle made a discovery that changed our understanding of bacteria and other single-celled organisms. He determined that even single-celled organisms such as algae can photosynthesize, turning carbon dioxide to sugar and water to oxygen. By applying this discovery to the growing field of space exploration, scientists developed a method for creating clean and renewable oxygen for astronauts in space.

In a later position at NASA, Chappelle began his work on bioluminescence. Using luciferase and luciferin, which give off light in the presence of ATP, an energy storage compound found in all living cells, he developed an assay to detect ATP in a sample by measuring the light produced when mixed with the luminescent chemicals. This assay method proved useful in countless applications, from determining the health of cell cultures in research to detecting small amounts of bacteria in urine.

In addition, Chappelle pioneered a method for assessing the health of crops using laser-induced fluorescence to measure photosynthesis, producing insights about plant stress, water conditions, and harvest timing. His contributions to science were able to shine a light, literally, across numerous research areas.

With these monumental research discoveries, these four scientists are a few of the many Black Americans who have contributed to the greater good of science and medicine despite being faced with interpersonal and systemic racial oppression. While there is still so much work to be done when it comes to racial equity throughout science and medicine, we hope you’ll join us in continuing to learn about and celebrate the lives of these and other inspiring Black scientists who positively impacted and shaped our world.