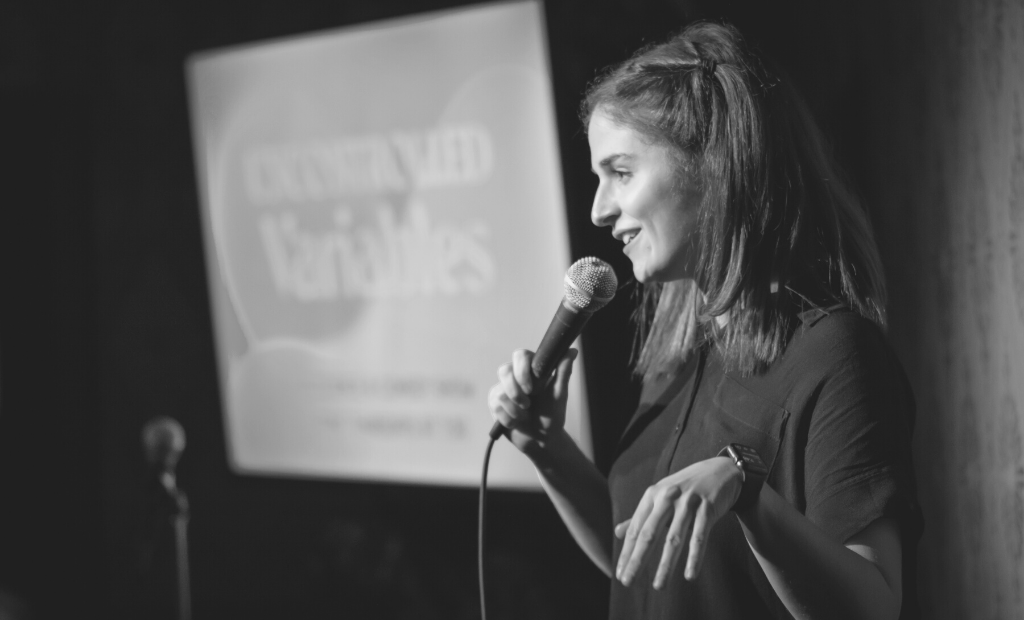 Alex Berr, Diya Basrai, and Kennen Hutchison are the producers behind the Chicago-based comedy troupe Uncontrolled Variables. Join them on the second Thursday of every month, as they (along with other scientists and comedians) combine science and comedy to make us laugh and teach us a thing or two along the way! Get to know a little more about the show below.

How did the idea to mix science and comedy come together to create Uncontrolled Variables?

AB: I’ve been interested in science for as long as I can remember, and a lot of the science communication I grew up with was pretty stiff, dry, and not representative of the diverse group of people who actually conduct scientific research. I started doing comedy to have a creative outlet during my Ph.D. and I didn’t see anyone integrating science into comedy in Chicago. I think the process of doing science can be silly and I wanted to highlight that through a comedy show. When we started, we knew we wanted to have a mix of scientists and comedians and we played around with the format until it felt like things were fun and flowing nicely.

DB: Alex came up with the idea. But I’ve always thought that science can be so deeply weird, absurd, and funny, but the nature of academia makes people always take it so seriously and at face value. Being involved in both comedy and science I think helped me see that they can be very easily blended together, just once taken out from the stiff nature of a seminar room.

KH: Uncontrolled Variables is definitely Alex’s brainchild! She reached out to me during the pandemic with a desire to mix her talents as a comedian—and the environment comedy comes in—with her passion for science. That first day we sat down and brainstormed what a show would look like that allowed us to tie in actual comedy (not just nerdy-punny science jokes) while teaching our audience a little bit about real science and maintaining the factual integrity of the science we were covering.

How do you get the content for your shows? Who are the performers?

AB: When we started, we basically just asked our friends to serve as the scientists for the show. It ended up being pretty biology-heavy because that’s what we know. As the show progressed, I made connections with people in different fields— for example, I met Greg Matthews, a statistics professor at Loyola (and a comic!), at an open mic. He did our show and has referred other faculty in other fields to do it. We also have a lot of grad students do the show— I’m part of Northwestern University Graduate Workers Union (NUGW), which represents grad workers across many different fields, so that’s connected me to students in other fields (chemical engineering, data science, physics) who I asked to do our show.

What can attendees expect from an Uncontrolled Variables show?

AB: Uncontrolled Variables is a fast-paced show with a little bit of everything. Comedians do short stand-up sets and then have to present three scientific slides created by our scientists. These slides are usually rife with graphs and data, so the comedians usually get pretty silly in their explanations. Once the comedians are done “presenting” the slides, the scientists present the research in their own words and participate in a Q&A with the audience. We do this with two pairs of scientists/comedians then we play some rapid-fire games with audience members. It’s silly and funny but also is usually at least somewhat educational.

What are some similarities you see between the worlds of science and comedy?

AB: It’s all about figuring out your hypothesis and testing it. In science, you think some phenomenon is happening, so you go test it a few times and see if you’re right. It’s the same thing with comedy. You think an idea is funny, so you go test it at an open mic. You make some changes and test it again until it works. In science, you’re not going to get the exact same results every time you run an experiment. It’s the same thing with comedy— even if you use the exact same phrasing to a joke every time it will never be the same. It comes down to figuring out the margin of error you’re comfortable with.

DB: Both are composed of highly motivated, ambitious, slightly weird people! Comics tend to look at very serious things in a funny way, I think sometimes scientists look at very funny things in a serious way.

KH: Both use interaction and trial and error to build upon each other. Both require a certain level of bravery to face the unknown to see if something works, and at the end of the day as an audience, we enjoy them most when they teach us something about ourselves.

What do you hope attendees take away from an Uncontrolled Variables show?

AB: Our basic goal is the same as any comedy show— for the audience to have fun. At best, the audience will walk away having learned something new and with a new appreciation for the human side of science and an understanding of what goes into making a new scientific discovery.

DB: Just to have a great time! And if they’re a scientist, an itch to watch more comedy. And if they’re into comedy, and itch to read a book for once in their life.

KH: A newfound enjoyment and connection to science and scientists.

What has been your favorite aspect of producing shows?

AB: It’s been a great way to hear about new science. I never would have learned about the science of social media or paleontology if I wasn’t doing this show. It also seems like a large fraction of our audience is grad students, which is a unique and energizing group to perform for. Diya said his favorite part is the money— let the record show we have yet to make money on this endeavor.

KH: I love seeing the audience get involved! Watching the scientists field questions from non-scientists and seeing that connection form in real-time is the most rewarding experience for me.

Any advice for scientists looking to get into the world of comedy?

AB: Just take the leap and go do an open mic or take an improv class. Everyone has something funny to say, you just have to figure out what that is. The scientists who have done the show have all been really funny and I think any of them could do comedy— it’s just a matter of getting out and doing it.

DB: Just start doing it! Say things you yourself think are funny. Don’t brag about the crazy amounts of money you’re making in academia.

KH: Even for scientists not interested in being comedians there is a lesson we can learn for how to make our talks, presentations, and research more approachable to larger audiences and take ourselves just a little less seriously.

More About the Producers:

Alex Berr: Alex is a Ph.D. candidate in Biomedical Engineering at Northwestern University where she studies the role of the cytoskeleton in lung cancer. She is also a Chicago-based comedian; she performs standup all over the city and can be seen performing with the sketch group Can of Worms. Alex produces the science-comedy show Uncontrolled Variables as well as the Shark Tank parody show The Goldfish Tank at the Lincoln Lodge Theater.

Diya Basrai: Diya is a standup comedian and scientist based in Chicago by way of San Diego. He has performed at comedy festivals such as Red Clay and Seattle International Comedy Competition and is a headline contributor for The Onion. When he’s not doing comedy, Diya works as a researcher at Northwestern, where he will be pursuing a Ph.D. in neuroscience starting this fall. In his free time, he enjoys chess and rock climbing.

Kennen Hutchison: Kennen is a virologist, educator, and science communicator based out of Chicago, IL. By day, he works as a Ph.D. candidate in the Department of Microbiology and Immunology at Northwestern University researching neuroinvasive viruses. At night, you can catch him doubling as a science communicator on Instagram and a STEM educator and entertainer for multiple companies, such as TasteMade, The King of Random, Project Exploration, and his own production unit, Science with Kennen.